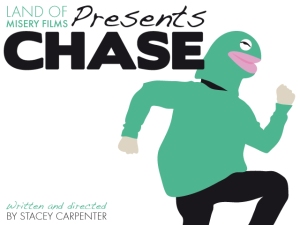 Founded in 2002 by Bradford Stevens and Stacey Carpenter, Land of Misery Productions is throwing its hat into the rough and tumble world of crowdfunding with its first feature film, Chase: Tony Takes on the World. ‘Chase’–written and directed by Stacey Carpenter–is an offbeat and hilarious comedy about a struggling actor striving for the bright lights of New York City. It is based loosely on their lives as actors in the windy city, Chicago, Illinois.

Stevens explains how their life experiences inform their passion for art-making, “the concept of writing what you know has always been big with us. I actually did live in a transient hotel by Midway airport while attending Second City. We both have actually crashed auditions, and written to Saturday Night Live on the regular, trying to convince them to let two talented unknowns host the show.” There is no telling how many miles one will have to run while chasing artistic aspirations.

Carpenter and Stevens need your support to realize this  state-of-the-art and uproarious film. They are working very hard and are launching their Indiegogo campaign in late September/early October 2015.

Please stay tuned for more information by visiting their website. Carpenter and Stevens can also be reached via e-mail at Landofmiseryfilms@gmail.com

I can’t wait to watch it!