Before I attended this celebrated exhibition last week at the Art Gallery of Ontario (AGO), I began drafting a write-up and learning deeply about Frida Kahlo and Diego Rivera’s lives. However, once I attended the exhibition, my whole perspective of what I was about to write completely changed and I had to start all over again. There is so much to retell about these Mexican painters, but I figured I shared rather my personal reaction to this exhibition. What I thought it was a message of pain, it was rather a message of love, and it was an emotional one.

It is established that Frida Kahlo and Diego Rivera have made their stamps not only for their art technique and representations, but also for Kahlo’s pain and suffering after her tragic accident which I think is overstated. Much focus has been placed on her physical pain rather than the pain that impassioned love brings at times. There is so much focus in people lives with drama; in particular, the artist. We romanticize them and focus on their physical pain and struggle rather than the optimistic and the true message they are trying to convey. Although some may argue that we all do learn from the process of pain, in this exhibition, Frida has a different message to share with all of us.

When I walked into the exhibition, I warned my kids and explained to them the tragic condition of Frida’s accident and how after so much pain she endured the bus tragedy by relieving herself with the act of painting, and that she never gave up painting. Her paintings were a way of depicting that physical pain. My children understood the message. However, once I navigated through the exhibition, I felt that it was not the message at all that Frida was trying to channel. Frida was not communicating her physical pain with any audience, but rather her heartfelt to Diego. Frida’s paintings are mainly messages of struggles and emotions that love can bring about.

As history tells, Frida had plans of becoming a medical Doctor; although she grew up appreciating the arts, she made a few pieces here and there. However, after her fatal bus accident, her life took a different toll and could not pursue medical school, having to spend the rest of her life trying to survive with little chance of recovering. By the time the accident happened, the arts had already taken part in her life and Diego was one of her biggest mentors. Diego was a complex man and his affairs hurt Frida. However, Frida relentlessly wanted to be part of Diego’s world and mastered his language—the language of painting. She became brilliantly prolific in an aim to communicate and wanted to be noticed, mainly by Diego.

Looking at Frida’s work, it is easy to get distracted with her accident and lose sight of the profound message she was trying to express. At first I got side-tracked and focused on her physical pain, but later I realized that there was a simpler and powerful message that she outpoured, making her vulnerable to judgements as her message was about “love,” her passionate love for Diego Rivera. While I was enjoying the exhibition, I thought, I would feel the pain, the pain of Frida’s suffering, but on the contrary, I felt so much Love! That is the message I took from this exhibition. Frida’s painting is all about communicating with Diego, from painter to painter, from artist to artist.

Frida was so passionate about him and their love is depicted in the photos and videos that were exhibited at the AGO. If you think about it, why did Frida paint so many self-portraits? At one point, Frida once said: “I paint myself because I am so often alone and because I am the subject I know best.” However, I believe, profoundly she was trying to reach out to Diego’s soul and communicate with him, as in saying, “I am here, love me, Diego.” Thus her paintings were intended for him. She also painted Diego in her forehead, which confirmed her compelling message; he was always in her mind, no matter what type of affair he or she had had.

Then, I also imagine Frida’s affairs were not much in response to feminism as many scholars try to attest, but to love, the fact of being betrayed and thus embittered, one can easily lose sight in our lives and try to find comfort outside our boundaries, outside societal expectations. As you glimpse at Frida’s self-portraits, I felt she was not looking at us; she was always thinking and gazing at Diego at all the times. Besides being incredible painters, Frida and Diego’s story is not just about painting, passion and politics, it’s mostly about their emotional attachment, it is about love. When Frida passed away in 1954, Diego, came to terms with Frida’s feelings, and wrote, “I realized that the most wonderful part of my life had been my love for Frida.” That leads me to believe their love affair was one of the greatest love stories of the century!

I really hope there is another world or next life for Frida and Diego to be together again, happily and faithfully. She would want it that way.

You ought to see this exhibition and experience the love, you be the judge!

Below are some of my favourite paintings of Diego and Frida’s works exhibited at the AGO. 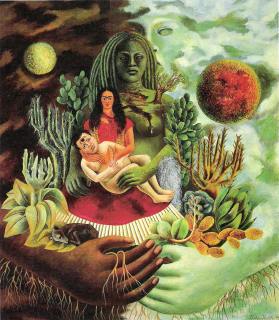 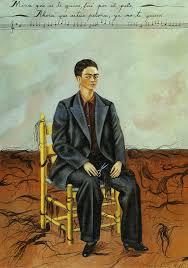 Sculpture at the AGO:

Frida Kahlo de Rivera, Mexican painter whose life began and ended in Mexico City, died soon after turning 47. At the age of six, Frida contracted polio, which caused her right leg to be much thinner than the other. It was to remain that way permanently. Kahlo had a volatile marriage with the renowned Mexican artist Diego Rivera. She suffered lifelong health problems, many of which derived from a traffic accident she experienced as a teenager. These issues are represented in her works, many of which are self-portraits of one sort or another.

Bus Tragedy: in September 17, 1925, Kahlo was riding in a bus that collided with a trolley car. She suffered serious injuries as a result of the accident, including a broken spinal column, a broken collarbone, broken ribs, a broken pelvis, 11 fractures in her right leg, a crushed and dislocated right foot, and a dislocated shoulder. Also, an iron handrail pierced her abdomen and her uterus, compromising her reproductive capacity.

Love Affair: Diego Rivera had a great influence on Frida’s painting style. Frida had always admired Diego and his work. She first approached Diego in the Public Ministry of Education, where he had been working on a mural in 1927. She showed him four of her paintings, and asked whether he considered her gifted. Diego was impressed and said, “You got talent.” After that, he became a frequent welcomed guest at Frida’s house. He gave her many insights about her artwork while still leaving her space to explore herself. There is no doubt that Diego’s mentorship strengthened Frida’s wish to pursue a career as an artist.

Influences: Kahlo was also influenced by indigenous Mexican culture, which is apparent in her use of bright colors, dramatic symbolism and primitive style. She frequently included the symbolic monkey. In Mexican mythology, monkeys are symbols of lust, but Kahlo portrayed them as tender and protective symbols. Her work has been celebrated in Mexico as emblematic of national and indigenous tradition, and by feminists for its uncompromising depiction of the female experience and form.  Her work, which has been sometimes characterized as Naïve art or folk art, has also been described as surrealist.

‘Big Break’: At the invitation of André Breton, she went to France during 1939 and was featured at an exhibition of her paintings in Paris. The Louvre bought one of her paintings, The Frame, which was displayed at the exhibit. This was the first work by a twentieth-century Mexican artist to be purchased by the renowned museum.

My paintings of Frida

One thought on “What About Love? Frida Kahlo and Diego Rivera”